The mission of the Kushite Nubian Collaborative (KNC) is to protect the ancient Kushite and Nubian archaeological sites along the Nile River from the large dam construction projects and subsequent flooding.  KNC also places emphasis on protecting the living Nubian heritage and its people, especially Nobiin, their original language, from cultural cleansing, marginalization, isolation, and displacement.

We will achieve these goals through media presentations and interviews, publications, working conferences, and field research to educate and enlighten a global audience about the need to preserve this sacred region of northeast Africa. The flooding of this region and the displacement of Nubians and other indigenous groups in Sudan is a crucial issue, and if it continues this would be a great and immeasurable loss to world history and a modern living heritage.

The Problem With Large Dams

The World Commission on Dams examined over 1,000 of the 45,000 large dams around the world, and clearly indicated in its November 2000 report that “no dam should be built without the demonstrable acceptance of the affected people,” and that they be consulted at each stage of the construction process.  Unfortunately, none of this has taken place in Sudan, and in fact the government has never followed internationally-accepted standards and produced a feasibility study, outlining the viability and impact of any of its planned or completed dam projects.

It should be understood that electricity is an uncontested factor for a county to develop, but the means to acquire this electricity is often contested and controversial.  There are several renewable forms of energy in Sudan, such as solar power, micro-hydro, and wind turbine, but these alternative sources of energy are not being considered because they are not as lucrative for the people involved.  The dams profit government officials, and investor countries benefit by being granted agricultural land and exclusive petroleum and mineral exploration rights, while the local communities are displaced and lose their sovereignty rights. 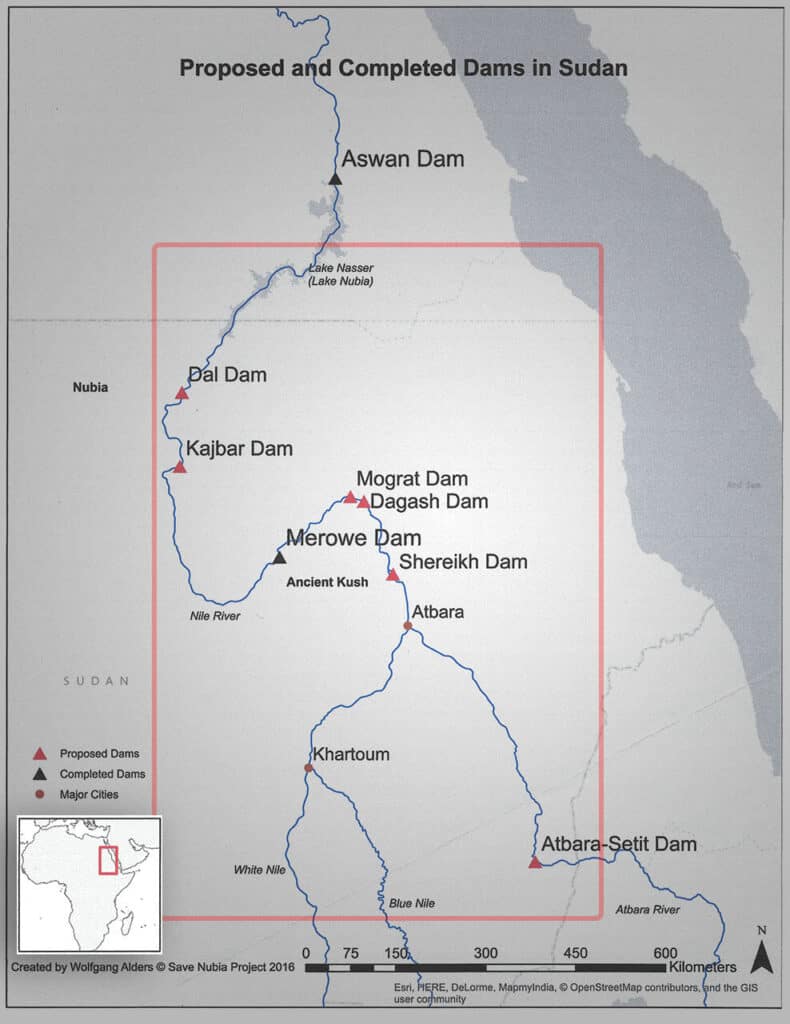 This dam was built at the first cataract of the Nile River, and at the time of construction it was the largest masonry dam in the world. It was designed to provide storage of annual floodwater and increase dry season water flow to support greater irrigation development and population growth in Egypt. However, the Aswan Dam provided inadequate storage capacity for Egypt’s development plans.

The Aswan High Dam in Egypt was built to generate a greater capacity of hydroelectric power, and it was a mega project which required about 30,000 men working during a portion of the project for 24-hour around the clock for five years. The dam raised the water level by 63 meters to 180 meters above sea level, and the reservoir created is a huge lake 340 miles long, extending well into Sudan near the 2nd cataract at Dal. It is called “Lake Nasser” in Egypt (and “Lake Nubia” in Sudan). The energy output in Egypt doubled and most of the power is used in Cairo, Aswan, and in the Delta region.

However, the Aswan High Dam was completed under much criticism. The dam was the first large scale attempt to regulate a major river system, and it was predicted that the ecological and environmental effects would be devastating. In the end, the dam project flooded 39 Nubian villages and displaced some 120,000 Nubians from their beloved homeland, and submerged countless ancient archaeological sites in the region. This dam project is the largest forced removal project on record, and has initiated a series of events threatening the survival of Nubian cultural identity and indigenous language.

On June 13, 2007, the Nubians from the local villages of Jaddi and Sabu near the Kajbar Dam construction site organized a peaceful protest against the dam project, when Sudanese government forces began shooting tear gas and eventually live ammunition killing four innocent protesters, and injuring many others. Later, the Sudanese government signed a $705 million contract with the Chinese company Sinohydro, one of the world’s largest hydropower contractors, but the Nubian protests forced a halt to the dam project.

Drowning the Land of the Ancestors: Dal & Kajbar Dams

This dam was completed in 2008 and it was designed to generate 1250 megawatts of electricity, supply water to increase agricultural production, and to protect against the high floods of the Nile River. However, the project did not benefit the local affected groups. Instead, the Merowe Dam created a reservoir of 108 miles (174 km) long, displaced between 50,000-70,000 Sudanese people, and submerged an estimated 2,500 ancient Kushite archaeological sites. The Manasir and Amri were among the indigenous groups forcibly resettled with poor results. They were not compensated for their displacement and loss of their fertile farm land, but were instead relocated to arid desert locations.

The Gilgel Gibe III Dam was a $1.8 billion project along the Omo River in Ethiopia’s SNNPR (Southern Nations, Nationalities, and Peoples Region), and it is the latest construction of a series of dams in the Gibe cascade. The Gibe hydroelectric plant was expected to generate 1870 megawatts of energy. The project began generating energy in 2016, and the final construction was completed in 2017.

However, the Gibe III Dam has caused considerable ecological problems and human hardship among the indigenous groups in the Omo Valley. These unique cultural groups such as the Mursi, Karo, Hamer, Bodi, Desenach, Kwegu, and Nyangatom have felt the negative effects of the Omo River no longer overflowing its banks and providing much needed water for crop irrigation and for their all-important livestock. These indigenous groups are struggling for cultural survival, and their plight is shared by the Lake Turkana tribes in northern Kenya. The Omo River flows southward into Lake Turkana in Kenya, and with the lower volume of water from the Omo, the Lake Turkana water levels have dropped dramatically since the construction of Gibe III and this continues to threaten to survival of the Kenyan groups, which depend on the fishing industry to survive. The Friends of Lake Turkana is an indigenous Kenyan group which has challenged the Gibe III dam as a direct threat to their survival.

In February 2017, this dam project was officially inaugurated by the former Sudan President Omar Al Bashir. This $1.9 billion project is a twin dam 320 megawatt project and is known as the Upper Atbara-Setit Dam Complex, where the Rumela Dam is constructed on the upper Atbara River, and the Burdana Dam is constructed on the Setit River in eastern Sudan. Ten of thousands of people have been displaced and the archaeologists from the Sudanese National Corporation of Antiquities and Museums (NCAM) had little time to salvage only a portion of the countless artifacts before the flooding began.

In an April 22, 2021 press release, Sudan Prime Minister Abdalla Hamdok issued orders to stop the construction of the Dal and Kajbar dams in northern Sudan. He stated that such dam projects must first be subjected to the economic, social, and environmental assessments, and that the local affected communities should be principle participants in the decision making for projects in their area.

Other pending dam projects to note in Sudan include the Sheriek Dam (5th cataract), Dagash Dam, and Mograt Dam, with the latter two projects located in the Nile River State (near Abu Hamed) between the 4th and 5th cataracts.

The largest and most controversial dam is the Grand Ethiopian Renaissance Dam (GERD), formerly known as the Millennium Dam, and it is being constructed along the Blue Nile. The construction of this $4 billion project began in 2011, and is part of Ethiopia’s bid to become the largest exporter of power in Africa.  The dam reservoir began filling in July 2020 in a two-stage process, and the project is more than 80% completed.  According to the Ethiopian Government, the GERD is projected to be the 7th largest dam in the world.  Egypt and Sudan are in an ongoing international dispute with Ethiopia over the use of the Nile water resources.

Stay Up To Date Regarding Conferences, Tours, Speaking Engagements, And Much More!